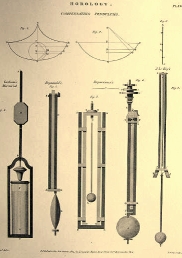 Pendulums are the defining feature of pendulum clocks, of course, but today they don’t elicit much thought. Most modern “pendulum” clocks simply drive the pendulum to provide a historical look, but a great deal of ingenuity originally went into their design in order to produce highly accurate clocks. This essay explores horologic design efforts that were so important at one time—not gearwork, winding mechanisms, crutches or escapements (which may appear as later essays), but the surprising inventiveness found in the “simple” pendulum itself.

It is commonly known that Galileo (1564-1642) discovered that a swinging weight exhibits isochronism, purportedly by noticing that chandeliers in the Pisa cathedral had identical periods despite the amplitudes of their swings. The advantage here is that the driving force for the pendulum, which is difficult to regulate, could vary without affecting its period. Galileo was a medical student in Pisa at the time and began using it to check patients’ pulse rates.

Galileo later established that the period of a pendulum varies as the square root of its length and is independent of the material of the pendulum bob (the mass at the end). One thing that surprised me when I encountered it is that the escapement preceded the pendulum—the verge escapement was used with hanging weights and possibly water clocks from at least the 14th century and probably much earlier. The pendulum provided a means of regulating such an escapement, and in fact Galileo invented the pin-wheel escapement to use in a pendulum clock he designed but never built. But it took the work of others to design pendulums for truly accurate clocks, and here we consider the contributions of three of these: Christiaan Huygens, George Graham and John Harrison.