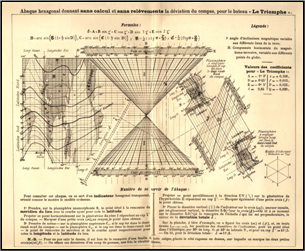 In 1885, Charles Lallemand, director general of the geodetic measurement of altitudes throughout France, published a graphical calculator for determining compass course corrections for the ship, Le Triomphe. It is a stunning piece of work, combining measured values of magnetic variation around the world with eight magnetic parameters of the ship also measured experimentally, all into a very complicated formula for magnetic deviation calculable with a single diagram plus a transparent overlay. This chart has appeared in a number of works as an archetype of graphic design (e.g., The Handbook of Data Visualization) or as the quintessential example of a little-known graphical technique that preceded and influenced d’Ocagne’s invention of nomograms—the hexagonal chart invented by Lallemand himself. Here we will have a look at the use and design of this interesting piece of mathematics history, as well as its natural extension to graphical calculators based on triangular coordinate systems. Part I of this essay covers Lallemand’s L’Abaque Triomphe, while Part II covers the general theory of hexagonal charts and triangular coordinate systems. A printer-friendly Word/PDF version with more detailed images is linked at the end of the essay.

END_OF_DOCUMENT_TOKEN_TO_BE_REPLACED 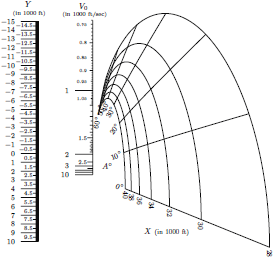 Last summer a fellow nomography enthusiast and friend, Joe Marasco, e-troduced me to the editor of the Undergraduate Mathematics and Its Applications (UMAP) Journal, with the idea of submitting my original 3-part nomography essay on this blog for publication. The experience I’ve had on this project with Paul Campbell, a professor at Beloit College and the editor of the journal, has been superb. In addition to his enthusiastic support on the article, he invited me to give talks on nomography and sundials at the college, which I thoroughly enjoyed doing last September.

The article, a significantly revised version of my blog essay, has now been published in the UMAP Journal, and per the standard agreement I can post the PDF of the article here for anyone to download. More information and a link to the article are below.

END_OF_DOCUMENT_TOKEN_TO_BE_REPLACED 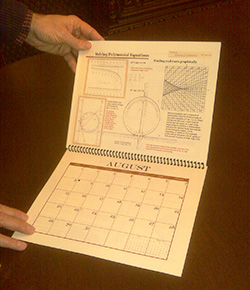 As you may have noticed, the history of graphical computing (nomograms and the like) has become one of the major themes of this blog. I did not foresee this, as I knew virtually nothing about the subject before I started researching my first essays on nomography a couple of years ago. This topic is still one of my main pursuits, and I’m as astonished by what I find now as I was back then. To capture a bit of this spirit, I’ve created a free 2010 calendar titled The Age of Graphical Computing that is available for downloading and printing. The fun thing is that you can test the examples right on the calendar to show that they work!

END_OF_DOCUMENT_TOKEN_TO_BE_REPLACED 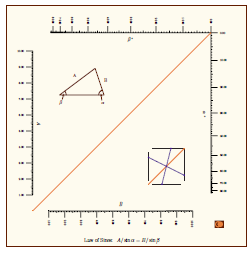 Are you intrigued by nomograms but have no idea how to go about drawing them? PyNomo is an amazing, free software package for drawing precision nomograms. The output is in vector form in a PDF or EPS file, so it can be printed in any size and still retain its sharpness. PyNomo directly supports 9 basic types of nomograms based simply on the format of the equation, so for these types there is no need to convert the equation to the standard nomographic determinant or use geometric relations. But it also supports compound nomograms as well as more complicated equations that have been cast into general determinant form, so it can produce output for any equation that can be plotted as a nomogram.

END_OF_DOCUMENT_TOKEN_TO_BE_REPLACED 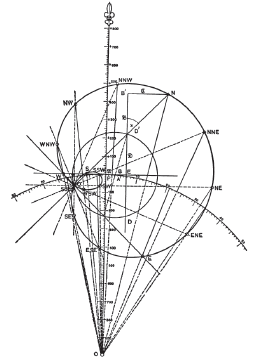 William Thomson called them “beautiful and ingenious geometrical constructions,” and in variance to their rather humdrum name dygograms are certainly charming to the eye. But these geometric constructions can conveniently generate and then calculate the magnetic deviation of a ship compass at a location.

With our electronic calculators and computers, we take for granted the effortless arithmetic and trigonometric calculations that so vexed our ancestors. Pre-calculated tables for roots and circular functions, generated through hard work, were often used to create tables of magnetic deviations for specific ships and locations. To reduce the chance of misreading these tables, a few types of graphical diagrams, not just dygograms, were invented to provide fast and accurate readings of magnetic deviation. These graphical calculators are the focus of this part of the essay.

END_OF_DOCUMENT_TOKEN_TO_BE_REPLACED

The Scottish mathematician and lawyer Archibald Smith first published in 1843 his equations for the magnetic deviation of a ship, or in other words, the error in the ship’s compasses from permanent and induced magnetic fields in the iron of the ship itself. This effect had been noticed in mostly wooden ships for centuries, and broad attempts to minimize it were implemented. But the advent of ships with iron hulls and steam engines in the early 1800s created a real crisis. A mathematical formulation of the deviation for all compass courses and locations at sea was needed in order to understand and compensate for it, and Smith became the preeminent expert in this sphere of activity. With Capt. Frederick J. Evans he extended his mathematical treatment to detailed procedures for measuring the magnetic parameters for a ship, and he also invented graphical methods for quickly calculating the magnetic deviation for any ship’s course once these parameters were found, constructions called dynamo-gonio-grams (force-angle diagrams), or dygograms for short.

Today, radio navigational systems such as LORAN and GPS, and inertial navigation systems with ring and fiber-optic gyros, gyrocompasses and the like have reduced the use of a ship’s compass to worst-case scenarios. But this triumph of mathematics and physics over the mysteries of magnetic deviation, entered into at a time when magnetic forces were barely understood and set against the backdrop of hundreds of shipwrecks and thousands of lost lives, is an enriching chapter in the history of science. Part I of this essay presents a brief sketch of the problem and the analysis and solutions that were developed to overcome it. Part II sets out with a discussion of Smith’s graphical methods of computing the magnetic deviation and concludes with a list of the references cited in the essay.

END_OF_DOCUMENT_TOKEN_TO_BE_REPLACED 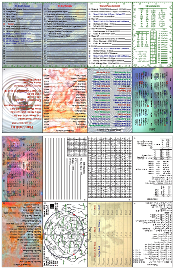 In a clear breach of this blog’s charter, I’d like to announce the release of free software I developed for creating convenient, pocket-sized paper organizers. Using LaTeX as a typesetting engine, a high quality PDF file is generated of 16 mini-pages, which is then printed on both sides of a sheet of letter or A4 paper and folded to create a small booklet that can fit in your pocket. The Windows interface directly supports several types of standard pages (List, Text, Calendars, Contacts, etc.) and maintains all user data between sessions. It also provides page types not seen in conventional organizers, such as a Vigenere Cipher page for on-the-go encrypted text and an Astronomy page with a calculated planisphere of current star/planet/moon locations along with other astronomical data. Beyond this, custom user-designed pages can be easily written in LaTeX script and shared in the Plans Unfolding forum and galleries. For more information, please visit the Plans Unfolding home page here. Now back to the subject at hand—thanks for your indulgence.

Mental calculators of yesteryear were usually described in magazines, newspapers and books in ways that can be startling in our more cynical age. But even today newspaper articles, documentaries and television features on modern lightning calculators appear almost regularly, often with a “hook” such as diminished capabilities in other areas (the “Einstein” effect). Surely there must be some reports that try to be objective, but I haven’t found them. At best they are naively written by people with little mathematical background; at worst they use considerable license (deception, really, if only by omission) to present a better story. This part of the essay is not directly related to the historical art of mental calculation itself, but I think it serves as a cautionary tale in evaluating articles on it.

END_OF_DOCUMENT_TOKEN_TO_BE_REPLACED 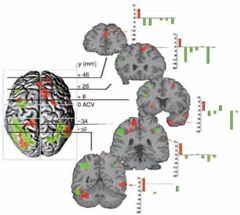 The types of calculations performed by lightning calculators were historically quite limited, notable mainly for the size of the numbers and the speed at which they were manipulated. But remember that the questioner had to verify every calculation by hand, making higher powers and roots (particularly inexact roots) much less feasible. The dawn of calculators and computers propelled some of these tasks into hitherto uncharted territories such as 13th or 23rd roots, deep roots of inexact powers, and so forth, much of it supported by more sophisticated mathematics. Here we will review the methods of calculation used in the past, many of them not commonly known, as well as other techniques that are relatively new.

END_OF_DOCUMENT_TOKEN_TO_BE_REPLACED 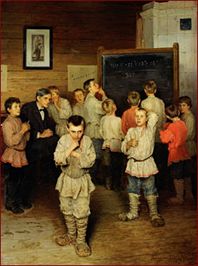 Individuals with preternatural abilities to calculate arithmetic results without pen, paper or other instruments, and to do so at astonishing speed, are the stuff of mathematical and psychological lore. These “lightning calculators” were sometimes of limited mental ability, sometimes illiterate but of average intelligence, and sometimes exceptionally bright, this despite the popular notion of the idiot savant. The techniques used by these people are not generally well known. In fact, despite claims by educators that acquiring a mental facility with arithmetic operations is essential to a student’s mathematics education, I see little in the textbooks other than simple estimations based on rounding values, surely the most basic and least interesting mental task. The field of mental calculation may not be a lost art per se, but in this digital age it most certainly is a neglected one.

Part I of this essay attempts to take a fresh look at both historical and modern lightning calculators. Part II describes classic and modern methods of mental calculation. And finally, Part III demonstrates as a cautionary tale the shallow and deceptive nature of most media coverage of lightning calculators, an important consideration in analyzing reports on them.